Nearly all conservatories have a heat and glare problem which makes them almost unbearable to use during the hot spring and summer months. Most of this problem is caused by the sun constantly shining upon the roof of your conservatory, this large expanse of roof glazing allows the sun to radiate the conservatory making it hot and uncomfortable.

Solar Film works by reflecting the heat away at source, without having Solar Film installed heat is absorbed at the source and then further absorbed by furnishings.

Q: How much heat will Elite’s Solar film stop?

A: Up to 80% of the heat normally passing though the glazing system.

A: Solar film works on the basic principle of reflecting heat away at source.

Q: Does this mean that my conservatory will be cold in the winter?

A: No. Elite’s Solar film is normally applied to the roof. Because the winters sun is much lower in the sky it can still shine in through the windows allowing your conservatory to warm naturally.

A: Elite’s Solar film adds a pleasant tint to the roof, in much the same style as tinted poly-carbonate now available. The only difference is that it keeps out the heat and is not for appearance only.

Q: Will Solar film reduce fading of curtains and furnishings?

A: Yes. It keeps out both ultraviolet (UV) and infrared rays, which are the major cause of fading. Your furniture, carpets and curtains will be protected and have a much extended life.

Q: How long will it take to install ?

A: The average conservatory takes no longer than a day 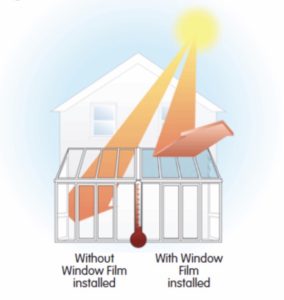 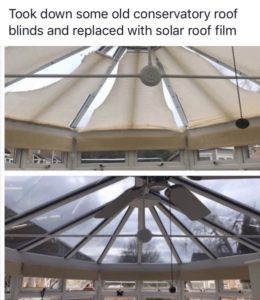 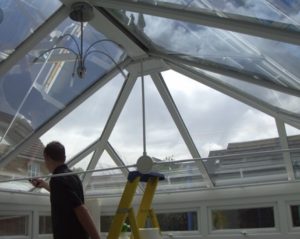